3 things that cause us to neglect our salvation. 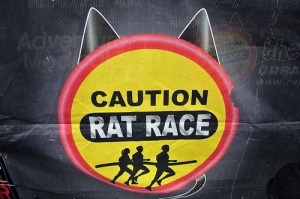 Neglecting one’s salvation would quite easily rank as one of the poorest decisions a person could make in this life. And even that simply sentence may rank among the biggest understatements in the history of blogging.As the saying goes, “Even an atheist does not want to go to Hell!”

Yesterday, we looked at four types of negligence: Passing by, ignoring, forgetting, and being careless. It is highly unlikely that those who consider themselves to be Christians would really “pass by” or “ignore” (at least not completely) their salvation. Those two items would belong to those who will not study to find out the truth for themselves. Much could be written on that topic but in this post, I want to talk about things that cause a Christian to neglect their salvation. This neglect will most likely come through forgetting and being careless.

Paul said: No soldier gets entangled in civilian pursuits, since his aim is to please the one who enlisted him. (2Ti 2:4)

Christians need to remember that they died…to sin, to this world and to the rat race that so many get caught up in.

Just because we resist Satan once or twice and he flees from us (as the Scripture says), does not mean that he never comes back again! Even with Jesus, after all the temptations were completed in the dessert, Luke records that the devil left him until “an opportune time.” When we get caught up in sin, whatever form that may take, we become entangled and our salvation can become neglected!

Committing a Sin and living in sin are two different things but neither is what we are supposed to do. We need to be on guard so as not to sin more just so grace can abound. When we do that, we truly treat our salvation with carelessness and as if it has no value. (Romans 6)

The world is always pulling.

Our old friends, if we grew up in the world, wonder at why we do not carry on with them like we used to. The world’s morals and values are constantly being pushed on us and worse yet, they are quoting Scriptures at us to bolster their point. “Jesus said to love” may be a true statement but Jesus also said to “Love God first” was the great commandment. Besides, love does require pointing out the sins so that people can change.

Have you ever noticed that in a rat race, that the cheese is not truly the end? Nope! Those poor rats are pulled out of the maze and sent back in to do it again. Then they change the maze or move the cheese!

Lack of contentment with what we have is a big cause for us to neglect our salvation. We take more overtime or second jobs to pay for things we want. We fail to realize that food, clothing, and shelter is enough when coupled with God’s blessings. It isn’t that you are wrong just  for working more but the reason for the work is often ‘wants’ not ‘needs’.  Then you get so busy fulfilling wants that you get careless with and forget what is truly important.

While it might seem our duty to buy more and get more and upgrade more and travel more, that theme is from the world and not God. Huxley’s Brave new world and even our Newscasts would be appalled at my next statement: Buy less, be content with less!

You will not get all of it anyway and you will find at the end, that the maze gets changed, the cheese moved, or they now have new and improved cheese with a bolder taste (but you need to run the race again to get it).

One of my readers, Eugene, cited a good Scripture on yesterday’s post. (You can read Eugene’s blog here!)

What we should do is “seek” and “set our minds” on those things that are above. If we do that, we will not be in danger of neglecting our salvation.

These three things, sin, the world’s pull, and the rat race are more general things that lead us to be negligent with our salvation.

Question: What are some specific things in your life that are innocent enough in and of themselves, but that you take to an extreme? Do those things cause you to neglect your salvation?

Are you neglecting your salvation?

The Hebrew writer, asks the question: How will we escape if we neglect so great a salvation?” (Heb 2:3) It is a rhetorical question and the answer is an obvious “We won’t!”

There at least four shades of meaning to the word neglect. Do any of them apply to you and your salvation?

Neglecting can mean to “pass by” something.

Now by chance a priest was going down that road, and when he saw him he passed by on the other side. (Luk 10:31)

This verse from the parable of the good Samaritan uses the words “passed by”. Yet it means that he ‘neglected’  the man lying on the side of the road.

Do we observe the Pass over in some areas of our Christian life? Do we just pass by hard to understand Scripture because we don’t think we will like the outcome? Might some of those areas affect our relationship with God and our salvation? Whether it is examining our own lives to make corrections, or examining Scriptures to understand ‘hard to understand’ passages, we should not pass by (neglect) those things that can affect our salvation and relationship with God.

Neglecting can be done by ignoring.

Another word for neglect is ‘ignore’.  Much like you might ignore your shoe laces until they become untied, you can ignore your salvation until it falls into a state of serious disrepair.

The Priests in the days of Nehemiah committed to doing their part for the service of the house of God.

I cannot help but think about what Paul wrote in 1 corinthians 3:17 that says “we are the temple of God” when he talks about the congregation. (Chapter 6 says the same thing and talks about the individual Christian). One of the ways you can destroy a house or a temple is to simply ignore it. Perhaps you have noticed that a building structure that is not lived in, will fall apart faster than one that is.

Neglecting can also be done by “forgetting”

Have you ever walked into another room and ‘forgot’ what you went in the room for? Sure, we all have. But what about those times when someone asks you to pick up something in town and, as you head back to the house, you slap your head and go “D’oh!” I forgot that. Sometimes those are very important things that we ‘neglecting’ by forgetting to to them.

Those things that are important to us are the things we will remember to do. In Hebrews 13, the writer reminds his audience to ‘not neglect to show hospitality in verse two and later in verse sixteen, “do not neglect to do good”.

I wonder if the rich man in the story of Lazarus and the rich man simply “forgot” to do good for Lazarus? Either way, he neglected to do anything and look where that landed him! God saved us so that we might walk in good works. Do not neglect by forgetting to do the good works for which we have been prepared. (Eph 2:10 and 2 Tim 3:16-17)

Neglecting can also be done by being careless with something of value.

This I think is the primary thought for this passage. “Pay special attention” to the salvation that you have received.

Therefore we must pay much closer attention to what we have heard, lest we drift away from it. For since the message declared by angels proved to be reliable, and every transgression or disobedience received a just retribution, how shall we escape if we neglect such a great salvation? It was declared at first by the Lord, and it was attested to us by those who heard… (Heb 2:1-3 ESV)

And why shouldn’t we pay more attention and take care to not be careless with the message of the Gospel. This message did not come by man’s doing! It came from God Himself. Jesus, the Son of God, God in the flesh, revealed the message to man. It did not come through a mediator (angels).

In a family with many siblings, the older child(ren) are often put in charge of the younger ones. What they tell their younger brothers and sisters still is something they need to listen to. Yet, it is the same as when the parent comes in and tells them what needs to be done directly. There is a difference, yet it is the same. If you don’t listen to your brother, they are not likely to ground you or spank you but the punishment will happen when the parent gets home. (and sometimes you talk your way out of it) However, when the parent is home, punishments happen quicker and you should “pay more attention” to what you hear.

Question: What are some things that keep us from paying attention like we ought to do? Lord, willing I will have some answers to that question tomorrow.